(Surely anyone who lived through the '90s can dredge up a memory of this PSA from the darkest recesses of his or her mind.)


What's the best book you've read this year?
Posted by Jill Sulam at 10:00 AM 0 comments

My husband, Jeremy, and I are both fans of Downton Abbey, where Robert Crawley (Lord Grantham) is the patriarch of the titular estate and butler Mr. Carson heads up a staff of drama-prone servants. Fellow Downtonians already know that next season won’t begin in the US until next winter. We’re tiding ourselves over by slowly rewatching the last season, season 3, on DVD. Jeremy noticed that there were several striking commonalities between an episode that aired toward the end of the season and the writings of humorist P. G. Wodehouse, and he decided to blog about it.

Did anyone else notice that Downton Abbey episode 6 (episodes 7 and 8 in the UK) of season 3 borrowed a lot of elements from P. G. Wodehouse stories? Here are five:

1.     Aunt Agatha
The young and irrepressible Rose MacClare, great-niece of Downton’s matriarch Violet, Dowager Countess of Grantham, has an offscreen Aunt Agatha, who’s described as “not much of a party person.” When Rose is going to be sent to live with her, Rose decries having “a monster for a jailer.”

Wodehouse’s famous protagonist Bertie Wooster also has an Aunt Agatha, known as “the nephew-crusher,” who makes his life miserable. “Aunt Agatha” has, following Wodehouse, become a term for an overbearing older woman.

3.     Blackmailing with a secret phrase
Former valet John Bates blackmails lady’s maid Sarah O’Brien simply by using the phrase “her ladyship’s soap,” which troubled (and in trouble) valet Thomas Barrow told him to say to O’Brien. The phrase stuns O’Brien, causing her to immediately change her tune and convince footman Jimmy Kent to drop his insistence that Mr. Barrow be sent away from Downton without a reference from Mr. Carson. Bates doesn’t even know what the phrase means.

Similarly, in Wodehouse’s novel The Code of the Woosters, Bertie Wooster says “Eulalie” to neutralize the brute Roderick Spode. Bertie also doesn’t know what the phrase means; he gets it from his butler Jeeves. It refers to a secret in Spode’s life that would ruin him were it known, just as the secret referenced by “her ladyship’s soap” would ruin O’Brien. In the case of Spode, who tries to be the intimidating leader of a fascist group called the Black Shorts, Eulalie is a ladies’ undergarments store he owns. (Which leads Bertie to remark, “You can’t be a successful Dictator and design women’s underclothing. One or the other. Not both.”)

4.     Hedonistic jazz club
With the Louisiana Boys playing jazz in the background, Rose MacClare and her married boyfriend Terence Margadale dance with abandon in the Blue Dragon club. Bertie Wooster likewise patronizes jazz clubs in New York during his exile of convenience from England.

5.     Estate agent job for the not-so-well-off
Tom Branson, husband of the late Sybil Crawley, the youngest daughter of Downton’s Lord Grantham, is not wealthy or aristocratic like his in-laws and, unlike them, must work to support himself. After Sybil dies, Tom is set to go join his brother Kieran’s car repair business in Ireland. But the Dowager Countess suggests that Tom be given the position of Downton’s estate agent—the overseer of the huge estate—to keep him and his infant daughter with the Crawley family.

In Wodehouse’s novel Psmith in the City, Psmith—who is from a well-off family—taps his cricket-playing friend Mike Jackson to be the Smith family estate agent (as well as convincing Psmith’s father to pay for Mike’s university education). This saves Mike from a dreary job in a bank, much as Tom was saved from working in a garage. (As a bonus parallel, Tom learns to play cricket in the next episode of Downton.)

When Jeremy isn’t reading Wodehouse or watching Downton Abbey, he’s developing Price Per Unit Calculator, a mobile web app you can use while shopping to compare unit prices. He’d appreciate your feedback on it!
Posted by Jill Sulam at 3:21 PM 0 comments

It's Pi Day, and editors everywhere are rejoicing.

Pi Day, March 14--you know, 3.14--is a nod to the mathematical constant π that even we language types remember from middle-school math class. I'm a mathematics proofreader (and occasional editor), so I may be more aware of this geeky "holiday" than others who work with words. (But I admit I'd never heard of Pi Day until I began working for the National Council of Teachers of Mathematics [NCTM].)

Some celebrate March 14 by eating pie. I am celebrating by sharing this "pi-ku," via NCTM's Illuminations teaching resources initiative. 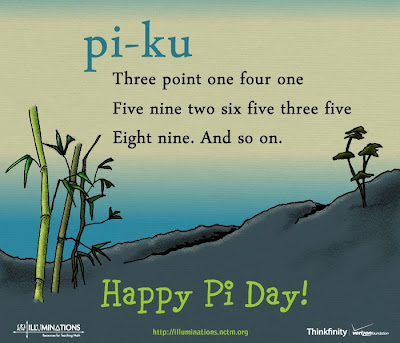 If you are a publisher of mathematics resources for teachers or students and are looking for an experienced freelance editor or proofreader, you can celebrate Pi Day by contacting me.
Posted by Jill Sulam at 2:24 PM 0 comments 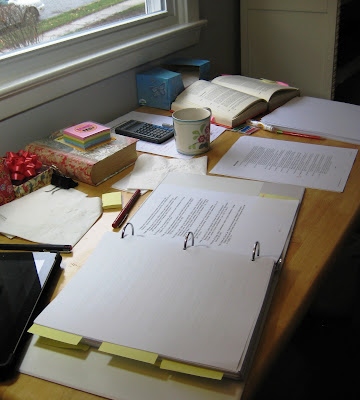 (From left to right, roughly)

Manuscript, thoughtfully hole-punched and put in a binder by my client.

Proofs of a book on educational equity in teaching K-8 mathematics.

Aged but still perfectly functional calculator on top of a page of notes about the proofs.

(Table: our former dining table, the perfect size and shape for spreading out.)

Email ThisBlogThis!Share to TwitterShare to FacebookShare to Pinterest
Labels: about me, freelance life, fun stuff

At the start of every year, I think about What I Need to Do Better, in both business and life in general. I'm not one to make real resolutions (because I'm not one to keep said resolutions), but I don't mind informally mulling over things I'd like to change.

Something I really needed to change was this site. People, my online resume had not been updated since 2011. This could not stand. I am revising my résumé page now; in the meantime, you'll find an up-to-the-minute, complete publications list (PDF format) in its place. (By the way, if you are looking for an easy way to link to a file, I suggest signing up for a Dropbox account and using Dropbox's new Links feature to create a custom link you can copy and paste into a tweet, blog post, or webpage.)

Another site-related change: how I use the blog. I have been an... infrequent blogger. I'd like that to change, but I've realized that I will probably never be a regular blogger if I stick to editing- and writing-related topics. Others are simply better at blogging on these subjects than I am. They keep up with the happenings in the publishing world; they read books that are less than five years old; they link to content as it's going viral, not a week after even your grandmother thinks it's played out. I'm not great at those things. But there must be something I can do particularly well, right? That thing is probably writing about, well, me.

But there are a couple of problems with that. First, this is a blog for my business. I assume you're here because you're looking for an editor or proofreader. You probably aren't interested in the details of my life--and I'm not sure I should be sharing them with the world. And that is the second problem. I am a very private person, and my image as a businessperson is a pressing concern. I'm not sure I have the guts to post about politics, personal issues, or the embarrassing books I read before bed. I want you to think of me as a competent professional, and I'm not sure that posting about, say, my favorite young adult book series does much to further that perception.

The thing is, however, that I can think of only two people in the editorial field who a) blog only about editing, proofreading, and writing AND b) update regularly. Other editors and proofreaders blog irregularly, or write about a variety of personal topics in addition to writing about their work. Some do this extraordinarily well, engaging readers by letting them into their lives and talking about the business of editing. Can I do that? Do I want to do that?

I started writing this post days ago and still don't have an answer to those questions. What I think I will do, for now, is write some more posts that are only kinda-sorta related to editing and writing. If I enjoy it and it helps me add new content more regularly, then I just may keep it up.
Posted by Jill Sulam at 1:41 PM 0 comments